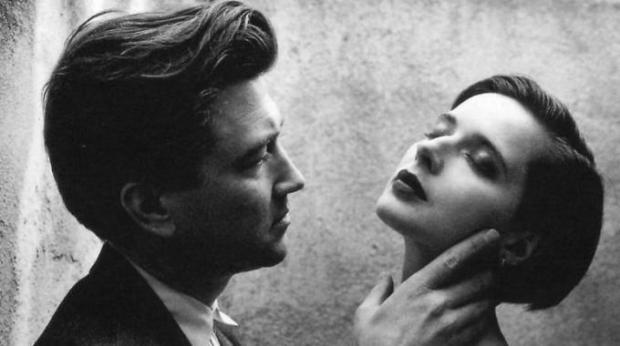 “The screen gets all fuzzy now as the viewer’s invited to imagine this. Coming out of an avant garde tradition, I get to this grad school and at the grad school, turns out all the teachers are realists. They’re not at all interested in post-modern avant garde stuff. Now, there’s an interesting delusion going on here — so they don’t like my stuff. I believe that it’s not because my stuff isn’t good, but because they just don’t happen to like this kind of esthetic.

“Blue Velvet” is a type of surrealism — it may have some — it may have debts. There’s a debt to Hitchcock somewhere. But it is an entirely new and original kind of surrealism. It no more comes out of a previous tradition or the post-modern thing. It is completely David Lynch. And I don’t know how well you or your viewers would remember the film, but there are some very odd — there’s a moment when a guy named “the yellow man” is shot in an apartment and then Jeffrey, the main character, runs into the apartment and the guy’s dead, but he’s still standing there. And there’s no explanation. You know, he’s just standing there. And it is — it’s almost classically French — Francophilistically surreal, and yet it seems absolutely true and absolutely appropriate.

And there was this — I know I’m taking a long time to answer your question. There was this way in which I all of a sudden realized that the point of being post-modern or being avant garde or whatever wasn’t to follow in a certain kind of tradition, that all that stuff is B.S. imposed by critics and camp followers afterwards, that what the really great artists do — and it sounds very trite to say it out loud, but what the really great artists do is they’re entirely themselves. They’re entirely themselves. They’ve got their own vision, their own way of fracturing reality, and that if it’s authentic and true, you will feel it in your nerve endings. And this is what “Blue Velvet” did for me.

I’m not suggesting it would do it for any other viewer, but I — Lynch very much helped snap me out of a kind of adolescent delusion that I was in about what sort of avant garde art could be. And it’s very odd because film and books are very different media. But I remember — I remember going with two poets and one other student fiction writer to go see this and then all of us going to the coffee shop afterwards and just, you know, slapping ourselves on the forehead. And it was this truly epiphantic experience.”